The next time you visit the Galt Museum in Lethbridge you may notice something a little different on the outside. A new mural has been erected featuring familiar faces past and present in our community.

Since 2011, the Galt Museum & Archives has featured a large 1950s photograph of a crowd of shoppers beside its entrance.  That has now changed, thanks to a community mosaic that was recently installed that showcases the many different faces that make up southwestern Alberta.  CEO and executive director for the museum, Darrin Martens says the update was needed because the community has changed over the last few decades.
The museum collected images by putting out a call to the community to submit photos of themselves, their families and friends.  One-hundred images were chosen, and then were rounded out with images from the museum’s archives.  There is a QR code at the mosaic that you can scan, that tells you the story behind each image.  Martens adds that the mosaic represents the culture of the Lethbridge area, and is a symbol of change, diversity, and inclusion.
The community mosaic project was financed by the Galt Museum’s standard operating budget, using staff resources to collect the images and design the mosaic.  The cost to make the actual mural was around $15,000.
Tags: Darrin Martens Galt Museum 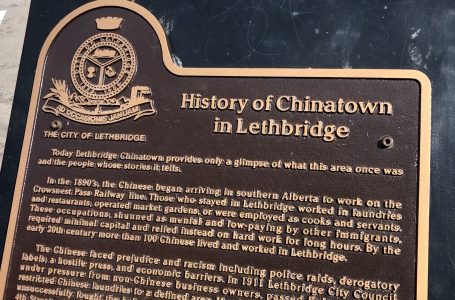